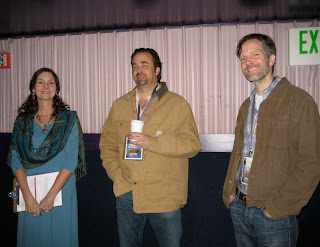 We became the Highest Rated Film on Durango website today - thanks to all who voted for us, and especially those who wrote comments. Those mean a lot. We were just invited to screen at the Boston International Film Festival, Apr. 17-26.  And the programmers of Monterey's Golden State Film Fest have paired L&RK with James Ivory's SHAKESPEARE WALLAH.  I'll be in Monterey Mar 26 to introduce my film and speak about Jim's (which was made a very long time before I started working with him!)  This photo from our screening in Sedona with filmmaker Phil Noyes and our screening's host.
Posted by JDA at 7:18 PM